Aerial view of the megalopolis

Here the extract from the Economist about São Paulo. It’s surely the great megalopolis of Brazil  but it has still to solve many contradictions to confirm its role as the capital of South America.In fact  Braszil has all the potentialities to become the new economic and cultural power in the American continent, overpassing , I think, also the USA dominance.

Ever since a coffee boom over a century ago brought money and migrants to Sao Paulo, Brazilians have seen the city as the locomotive of economic growth. By the 1970s, Sao Paulo had not only surpassed in size and wealth its traditional rival, Rio de Janeiro, but it had become the largest industrial city in the southern hemisphere. In those years of Brazil’s economic “miracle”, the city swelled by a dizzying 5% a year, as the prospect of a job in its factories brought the poor and landless flocking in by the busload from Brazil’s north-east. By 1995, the city itself had a population of 10.1m, and the Sao Paulo metropolitan region had 17m people, making it one of the world’s largest conurbations, rivalling Mexico city and Tokyo.

Now, however, the “city that cannot stop”, as it was once proudly known, appears to many to have crawled, rusting, into a siding. By the official count, open unemployment in the Sao Paulo metropolitan region has jumped to 9% in March, the highest figure since 1982. Throw in the under-employed, and the figure is double that, or 1.5m people. With unemployment have come rising crime and violence, especially in poorer districts. In the first three months of this year, 2,129 people were murdered in greater Sao Paulo (up from 1,900 in the same period last year), or roughly one an hour. Add to that pollution, traffic and general ugliness, and it is not surprising that polls suggest 60% of Paulistanos would like to leave the city.

Behind this malaise lies a structural change in the city’s economy, and in Brazil’s. Poor communications, protective tariffs and chronic inflation meant that from the 1950s factories for new industries such as car making came to cluster round the city, heedless of costs, since that was where the consumer market lay. Today, more open trade, better roads and low inflation mean that many industries no longer need to be in the city—and have many reasons to cut costs by fleeing it.

First, new factories began to sprout on green-field sites in pleasant, fast-growing towns in the interior of Sao Paulo state. More recently, to Sao Paulo’s chagrin, other states such as Parana, Rio Grande do Sul and Minas Gerais have offered tax breaks to lure big new car factories. Such deals make headlines, yet they are misleading. In 1996, Sao Paulo state still accounted for 53% of Brazil’s industrial output, a share that has barely changed since 1990. The difference is that industry is now spread out over a much wider area: in economic terms, Sao Paulo’s metropolitan region today has a radius of roughly 100 kilometres (60 miles), including satellite cities such as Campinas and Sao Jose dos Campos. State officials like to compare this area, with its universities, research institutes and new computer and telecoms equipment plants, to North Carolina’s “research triangle”.

In the traditional industrial belt on the city’s southern fringe (an area known as ABC, after its towns’ initials), officials invoke, with fear, a different parallel: Detroit. Car factories made these towns prosperous. Now they struggle to attract new industry. Powerful trade unions pushed up wages, to 40% higher than in neighbouring states. Land is expensive, and traffic congestion makes just-in-time supply difficult.

Such places have acquired the air of dormitory towns, as shopping centres and hypermarkets sprout where once factories stood. But these ventures are lured by a consumer market formed by industrial workers, argues Celso Daniel, the mayor of Santo Andre. ABC, he says, must hang on to the industry it still has by helping it to modernise. Mr Daniel is involved in a pioneering “regional consortium” of the ABC towns, which is trying to improve infrastructure and workers’ training. 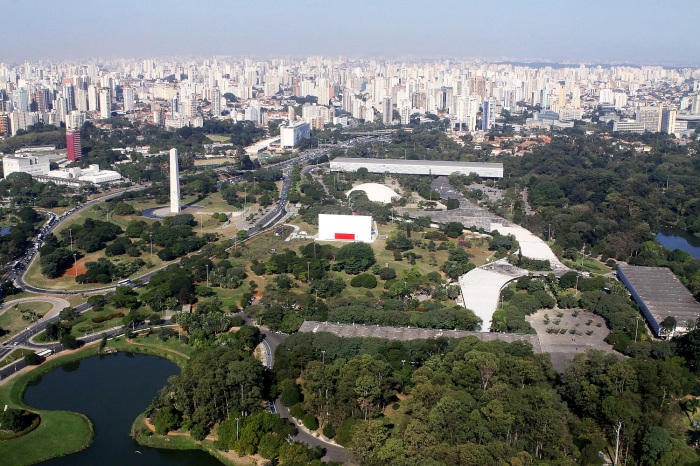 If some parts of Sao Paulo have carried the costs of Brazil’s opening to foreign trade and investment, others have grabbed many benefits. One face of the future is the jagged line of post-modern skyscrapers on the Marginal (the inner-ring road) beside the river Pinheiros. This area now accounts for 70% of deals in Sao Paulo’s market for offices, which booms despite Brazil’s slump. In 1997, 300,000 square metres of office space was sold—three times the annual average in the decade to 1993, according to CB Richard Ellis, a property firm. Sao Paulo is Latin America’s largest financial centre, and companies’—especially multinational companies’—first choice for head offices. In their wake come consultants, accountants and international law firms. The trade fairs and conferences, fashion shows and cultural events that also come, plus Brazil’s best restaurants and shops, mean that, improbably, the city now claims to attract more tourists than Rio. In short, Sao Paulo has become the business capital of Mercosur, the putative common market centred on Brazil and Argentina. Proof of that came last year, when a consortium headed by Bell South paid a huge $2.5 billion for a licence to set up a mobile phone service in the city.

Yet the Marginal Pinheiros also shows another side of the city: the river is a stinking cess-pit, the ring-road is choked at rush hour, and some offices overlook shanties. For decades, South America’s most robustly capitalist city grew through its own, restless momentum, while public services failed to keep up. A quarter of the population lives in favelas, or shanty towns. And unlike some of the 1950s migrants, who quickly prospered, the average favela-dweller is now stuck there, in unhealthy surroundings, for around 15 years, according to Pedro Jacobi, of the University of Sao Paulo.

The city’s air and waterways are polluted and its drains overwhelmed by storms, producing floods that stop traffic for hours. A helicopter fleet larger than that of Los Angeles is an alternative few can afford. Mexico city has over 200km of metro lines. Sao Paulo has less than 50km.

The administration of Sao Paulo is complicated by a division of responsibility between the state (which handles schools, police and railways), the city and the 39 other mayoralties that make up the metropolitan region. Politicians have not improved matters. The state government went bust in the early 1990s. Only now has it started work on an orbital motorway, more metro lines and improvements to the suburban railway. More recently, the mayor’s office has been to blame for mismanagement. Paulo Maluf, a conservative populist who was mayor from 1992 to 1996, broke the budget by building expensive tunnels which, predictably, failed to get the traffic flowing. His successor, Celso Pitta, is struggling to find the money for a better idea, a souped-up trolleybus system.

At last, as Sao Paulo’s population growth rate has slowed to under 0.5% a year, the opportunity exists to make good the shortfall in services. If it is to get back on the tracks, Brazil’s locomotive needs to offer a better quality of life to its residents.

One thought on “Contradictions of São Paulo,the locomotive of Brazil”